No, this isn’t in reference to the political tell-all that’s been in the news lately, and thank God for that.

Let me begin here: I was sitting at the computer the other day, casting around for an idea for a blog post. Nothing was forthcoming. I literally stared at a blank screen for I don’t know how long.

Inevitably, I started goofing off out of sheer boredom. Facebook, Pinterest, Youtube. I suddenly had an idea. No, not for a blog post. But I could listen to the new U2 album on Youtube. Does anyone even listen to “albums” anymore? U2 fans of a certain age do. And used to be, I had to save up my pennies to buy that new CD. Now I can listen to an entire album for free on my computer. Ah, progress!

Anyway, as I listened to “Songs of Experience”, I started to get a sinking feeling. I didn’t like it. Usually, it takes a few listenings for me to get the feel of an album, but I have to at least recognize some kind of affinity for me to listen a second time, and a third, etc. It was like that for their previous album, “Songs of Innocence”, and I ended up loving that album. But “Songs of Experience”, the “companion” album to Innocence, left me definitely unimpressed.

This isn’t a review of that album. I didn’t like it; let’s leave it at that. It’s been hit or miss for me with this band for several years now, maybe decades, and I was left wondering: what happened to the band of my youth?

Okay, but what does that mean? Does it mean they should hang it up? That Bono should just concentrate on his activism, which is a worthy and noble undertaking? Because it pains me to see this group put out mediocre work (Yes, I have very high standards. Don’t blame me, they set the bar).

Is Rock’n’Roll dead? Yes, in a world now dominated by pop, rap, and whatever the hell else they’re calling music these days, I fear it’s true. (Do I sound ornery? I sound ornery.) And that breaks this Gen Xer’s heart to the very core. All we can do is look back, because no one can seem to capture the magic anymore. Even those acts that did work the magic back in the day. They’ve lost something. What is it?

Well, youth, obviously. But also the main ingredient that comes with it (besides freshness and intensity and raw urgency): anger. Fire and fury. And the energy to scream (sing) about it at the top of their lungs. I’m thinking about Boy and October. I’m thinking about War and Unforgettable Fire, and Joshua Tree.

Remember Alannis Morissette? That was one pissed off bitch. Where is she now? If I had to guess, she’s baking cookies for the PTO.

Not that we (people over 40, just so we’re clear) don’t still get angry. I can honestly say that I’ve felt more rage in the last decade of my life than I ever felt in the first three put together. But it’s a different sort of rage. It’s more of an internal thing than at the wider world (though there’s that, too, especially now).

Or maybe the anger is the same, but we’re different. We simply don’t have the time to indulge in unadulterated rage. Because there’s runny noses to wipe, and bills to pay, and doctor appointments to get to, and aging parents to take care of, and marriages to tend. Anger has to be set aside, because there’s shit to get done. It’s not about you and your disaffected anger anymore.

Yeah, growing up sucks. It can be boring.

And honestly, you get tired. You can’t sustain anger over a long period of time; you’ll burn out. In youth, the flame energizes and inspires you, because that’s all you have. In the later years, it simply burns you. It might even kill you.

Bono understood that he couldn’t just sing about injustice. He had to take action. Walk the walk. And you can’t meet with world leaders and start yelling about how unfair everything is. You have to cultivate patience, and understanding, and perseverance. You have to be willing to compromise, to choose between the lesser of two evils, sometimes. In youth, there was no gray areas, only black and white, and compromise meant you gave up. Evil was evil, period. But after life runs you over a couple of times (or a couple dozen), the fire gets stamped out. Hopefully humbleness replaces the anger. If you’re lucky, gratefulness replaces the fury. At least enough to balance out the cynicism.

One of the things I loved about U2 was that underneath all that youthful discontent, they held onto hope. Their faith had a lot to do with that, and I admired it. I think it’s sustained them for 30-plus years. Is it better to burn out than to fade away? I’m not so sure. Let’s ask the 27-Club: Jimi, Jim, Janis, Curt, Amy. Oh yeah, we can’t. They died before they got old.

Maybe maturity makes for boring music. But not always. I find it interesting that I loved “Songs of Innocence”, when U2 wrote about growing up in Ireland, but “Songs of Experience”, presumably about their older selves, left me cold. 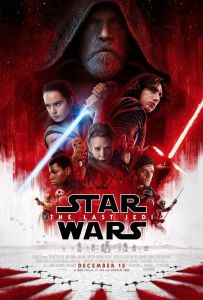 This isn’t any kind of formal review of the movie, just some personal reactions to what’s been happening in a galaxy far, far away.

My point is, when I was a kid, Star Wars was magical. It could do no wrong (although, at the age of thirteen, I had some trouble taking the Ewoks seriously). It had taken a permanent place in my heart as something I held very dear, and always would. Return of the Jedi’s happy ending left me feeling satisfied and that all was well with the universe.

Except it wasn’t. There are no lasting happy endings, and as someone with a little gray in her hair, I understand that now.

Prequels and stand-alone movies never mattered to me. What mattered were the original characters I came to know and love, and what happened to them. So when I heard that Episodes seven, eight and nine were being made, I paid attention.

The Force Awakens, for the most part, pleased me, but you can go here and see how I reacted to Han Solo’s death. I whined and belly-ached that it wasn’t a worthy death. Of course it wasn’t, that was the whole point. It got me engaged, it made me angry and I wanted justice. I was invested on an emotional level, which is what any good story should do.

And The Last Jedi? I don’t know. Despite numerous space battles and personal skirmishes (and believe me, I was a bit battle-weary by the end of the movie), I wasn’t wowed. I understand that part of the appeal of Star Wars is exciting space battles, but maybe we’ve seen so much of it in so many movies lately that we’ve grown numb to it. I have, anyway. In the original films, there was maybe one big battle the story line was culminating to, or it began the film and there was fallout from it. Now we’re just bombarded with explosions and violence and it’s supposed to entertain us. Maybe I’m just getting old, but I need more than that.

There were some character arcs that I found interesting. The whole Kylo Ren/Rey connection (even though orchestrated by Snoke [and where the heck did that guy come from, anyway?]) was illuminating. The internal struggle between Kylo Ren and Ben Solo has been made painfully clear, and it’s equally clear that the minimally-trained Rey is having problems controlling her emotions, namely anger, impatience, fear, and hatred. And we all know where those emotions lead, don’t we, kids? So while one still has a spark of light, and the other is vulnerable to the dark, they both still stubbornly hold to their courses. Still no clue as to who Rey’s parents might be, even though Kylo Ren asserted that they were nobody. I doubt it.

There were several new characters this time around, including Rose, a Resistance fighter who helps Finn on a mission to find a codebreaker to shut down a tracking device so….oh, never mind. I really thought they’d find Lando Calrissian in that gambling city, but they only found this weird guy played by Benicio del Toro, whose character name I don’t remember, if I ever caught it at all. A business man who doesn’t take sides, only the side of money. I’m assuming by the end of the trilogy, he’ll find his heart and do the right thing, like an erstwhile Han Solo.

In fact, I found too many echoes of the original here. I noticed them in The Force Awakens, but I was willing to forgive it in the first movie, as a means of making us feel we’re in familiar territory. Not now. The same exact themes are explored here, which in itself would not be unforgivable, but it is when it’s almost word for word. When Kylo Ren tempts Rey to turn to the dark side and join him to rule the universe, I just had this sinking feeling (I have a really bad feeling about this…). Come on, guys. You’re creative geniuses. You can do better than that.

I think my favorite secondary characters were the porgs and the crystal foxes. Way better than Ewoks. Just wanted to say that. 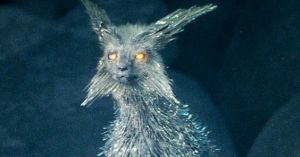 Of course the most important character to me in this film is Luke. Or, as I like to call him, Dark Luke. Not the Dark Side, just dark. This is not the sunny, optimistic farmboy from A New Hope, or even the newly mature and sober Luke from Return of the Jedi. This is a weathered Luke who’s given up all hope, who’s given up, well, everything. Even the Force. His failure with Ben Solo has crushed him. He is heavy with regret and despair. He’s got a bit of gray in his hair.

Mark Hamill himself has made comments on how he was a little disappointed in the way Luke is portrayed in this film. He felt that Luke, a Jedi, would never give up, that he’d be stronger than that. I suppose. But I find that I dig Dark Luke. He’s much more interesting than he’s ever been before. He’s realistic. He’s an older, wiser Luke who’s been battered by life. Just like the rest of us. He’s not a hero, he’s real. I also loved Yoda’s little cameo. I dug Dark Luke, but he did need a bit of scolding.

But naturally, he becomes a hero in the end. I liked that little trick he played on Kylo Ren. Luke’s death was a worthy death, a good death. I’m satisfied on that point.

So, while there are certainly flaws in Episode 8, I’m still in. I want to know what will happen. I’m curious to see how Leia’s character will be dealt with considering the untimely death of Carrie Fisher. Episode 9 was supposed to be her showcase, but it wasn’t meant to be. At least we got to see her escape death in the film–even cold, dark space can’t kill our Princess!

Are you a fan? What did you think of The Last Jedi? Drop a line and we’ll talk about it!

The Blog of Sarah Daniels, Writer.

Where a Millennial R(uins)eviews Everything

Random Musings of a Book Aficionado

Adrian vs. the World

We Review You Watch

Thoughts and opinions on the latest movies I've watched

Thoughts on life With a Disability

my thoughts on film, games, anime, and more

Reviews and ramblings from my pages...

SpinaBifida from a Parents point of view